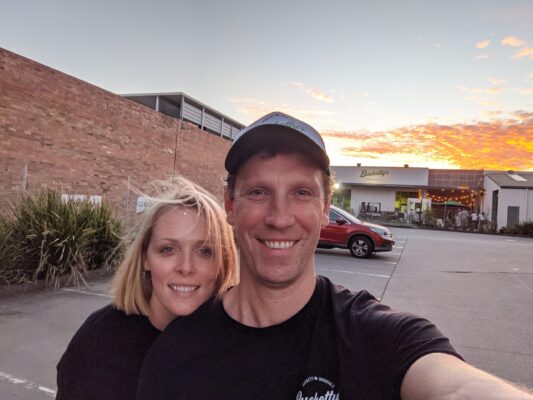 What’s your favourite place on the Northern Beaches?
South Curly followed by a strong flat white at Gusto

Is there something about you that would surprise people?
Neither of us have any experience in brewing or hospitality!

What’s something everyone should do at least once?
Travel. Cliché I know… but it’s true. There’s a big world out there that needs to be seen to be believed.

It’s Sunday afternoon, where do we find you?
If we’re short staffed (which is common lately!) one of us will be behind the bar at Bucketty’s and the other looking after our boy while sinking a few Bucketty’s on the street with our neighbours.

If you were down to your last $50 what would you spend it on?
I’d buy a case of Bucketty’s, which I’d then sell as single cans at a margin. Then I’d buy another case of Bucketty’s and do it again until I had enough money to buy a pallet and then I’d hire people to help me sell them. Bucketty’s for all!

How did Bucketty’s happen? How long have you been operating?
We’ve been open a bit over a year, but it’s been in planning for years. There’s a whole backstory which is too long to cover here, but this whole thing was Lexi’s idea!

Best business experience?
We were blown away by the support from locals during last years lockdown. After turning the brewery into an impromptu drive-thru, we had cars queued around the block every weekend coming to get their Bucketty’s fix and keep our beer turning over.

If you weren’t doing this, what would you be doing?
Honestly… This is actually what we want to be doing right now.

Best part of your job or most enjoyable part of your job?
The smiles and good vibes from punters as they walk through the front door each night. People come to Bucketty’s to enjoy themselves and we love sharing in that experience with them.

Most stressful part of your job?
The intensity of a full tap room on a Saturday night. It’s a wild experience when we’ve got 200 punters inside and another 50 lined up outside. When the band’s playing and we’re heaving with people. There’s nothing like it! It’s good kinda stress and slightly addictive.

Weirdest thing that has ever happened at work?
There’s been plenty of weird shit that’s happened over the past year, but a standout is when a lady mistakenly unscrewed a cap on our 2,000 filtered water tank, It’s one of the big stainless tanks that’s used in the brewing process but also doubles as our water station. The force of the tank opening created a geyser of near freezing water that pumped across the bar. We’ve put a lock on that now.

What’s the best part of working on the Northern Beaches? Why’d you chose to work here?
The warmth of the community, the smell and feel of the ocean, the smile and wave when people let you in during traffic. There’s nowhere like here.

What would you rate 10/10?
Our beers! There’s always room for improvement, but we reckon they’re bloody good.

What is the best advice you’ve received?
Spend less than you earn.

What’s the best thing that’s happened to you this week?
This interview! Being selected as a local legend is an honour!

Does anything scare you?
Yes! When Nick talks about opening up a second brewery!

What’s your most treasured possession?
Our son

What travel experiences are on your bucket list?
The Northern Lights, US brewery trail, South America

How do you switch off?
Not easily

What’s your guilty pleasure?
Beer on a Monday night

If you were an animal, what would you be?
Rhino

How would you like to be remembered?
As a hard working, generous, fun loving entrepreneur.

If we could ask you one more question, what would it be and what’s your answer?
Are you going to open up another brewery?
It’s definitely on the cards. Watch this space!