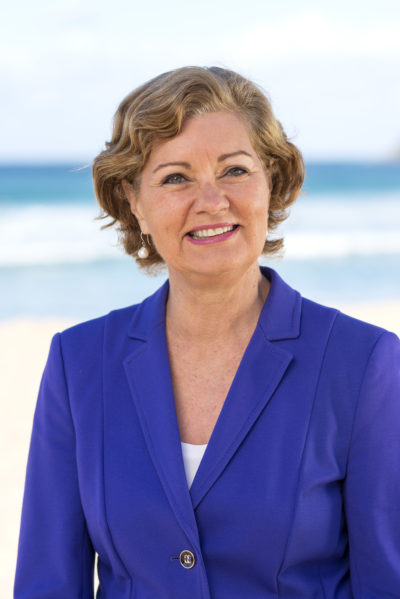 What’s your favourite place on the Northern Beaches?
Little Manly.  It’s a  family beach with wonderful views of the harbour

Is there something about you that would surprise people?
I was an amateur triathlete for twenty years

What’s something everyone should do at least once?
Visit Borneo.  I went there last year and just loved it.

It’s Sunday afternoon, where do we find you?
Probably at Stocklands doing the weekly food shop.

If you were down to your last $50 what would you spend it on?
A movie and choc-top ice cream with a friend

How did Good for Manly Association happen?  How long have you been operating?
I formed the Good for Manly Association in 2012 to provide a voice for residents in the Manly area. It soon became clear that having a representative on the Council was one way to be effective, so I stood for election as an Independent in 2012 for the then Manly Council.  I am now in my second term as a Councillor and am Deputy Mayor of the Northern Beaches Council.

Best business experience?
Campaigning against Manly Council’s 2015 Plan to build a major car park on the historic Manly Oval site. This project was subsequently cancelled when the Council was amalgamated in 2016 and an Administrator was appointed. The car park proposal was found to be seriously flawed. Manly Oval, as part of Ivanhoe Park, has subsequently been listed on the State Heritage Register.

If you weren’t doing this, what would you be doing?
Something to support the community. I love Manly and the Northern Beaches and it is such a privilege to live here.

Best part of your job or most enjoyable part of your job?
Being in a position to influence change, support those in need and work towards enhancing the facilities in Manly and the Northern Beaches.

Most stressful part of your job?
Dealing with the hundreds of emails I receive every month requiring responses and follow-through.

Weirdest thing that has ever happened at work?
Too difficult to answer. When you are dealing with the public, weird and unexpected things happen all the time.

What’s the best part of working on the Northern Beaches? Why’d you chose to work here?
Running into people I know all the time!  It’s so relaxing walking to meetings and not having to commute for hours.

What is the best advice you’ve received?
Funnily enough, it was a phrase I pick up in high school: “I alone can do it, but I cannot do it alone”.  It has always stuck with me.

What’s the best thing that’s happened to you this week?
Spending the day with my three nephews who are under the age of 8.

Greatest weakness?
Wanting to do everything NOW

Does anything scare you?
Yes, the major increase in the number of people who are homeless, and also the increase in
mental illness and suicides in our area.

What’s your most treasured possession?
A mini chest of drawers made for me by my Dad.  He was never very good at carpentry and
laboured for hours in his later years to create this special gift for me.

What’s your idea of absolute happiness?
The old adage sums it up well for me, “Someone to love, something to do and something to look
forward to”

Which two famous people would you choose to be stuck in a lift with?
Prime Minister Scott Morrison so I could suggest to him it’s time to have a plan to address our
climate disasters, and comedian Judith Lucy so I could have a good laugh.

What travel experience is on your bucket list?
I’m lucky, I’ve already travelled a great deal but I would love to revisit Sth America.

How do you switch off?
Watch TV, I love the ABC Aussie Dramas and comedy. Also cooking.

If you were an animal, what would you be?
A meerkat. Lively, social, inquisitive & friendly.

How would you like to be remembered?
As someone who genuinely cared for her community and was influential in improving the infrastructure and services available in this area.

If we could ask you one more question what would it be and what’s your answer?
What is the best way to keep in touch with what’s happening in Manly? Follow my Facebook Page:  Good For Manly.