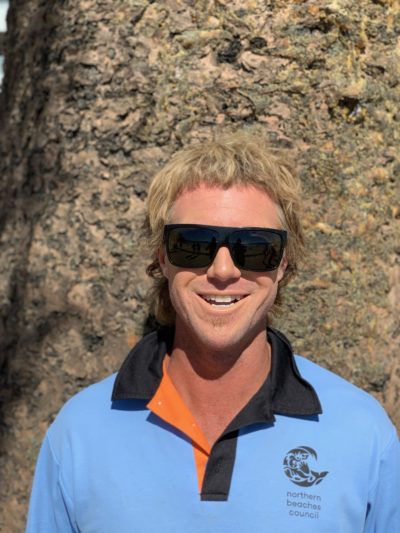 What’s your favourite place on the Northern Beaches?
Manly Corner in the winter

Is there something about you that would surprise people?
I don’t drink coffee, love the smell but don’t like the taste!

What’s something everyone should do at least once?
Do a shark dive.

It’s Sunday afternoon, where do we find you?
Fighting beach crime and saving lives between Manly Corner and the volleyball courts until 6pm then I’ll be across the road at the headquarters (Steyne Hotel) rehydrating!

How long have you been doing what your doing?
In the early naughties (2001) I’d mentioned to a few of the lifeguards at Manly I knew at the time I was keen to get some work lifeguarding after I’d finished my carpentry apprenticeship in December 2001 and they said they’d put a good word in for me but couldn’t promise me anything. Cut a long story short Chrissy Eve 2001 Manly Beach was closed due to big surf and I was heading down the boat ramp at Manly corner heading out for a surf and Ching and Smitty yelled out to me from the Surf Club Balcony “Oi Cam what are you doing?” I said “Gonna surf the corner!” They replied “no you’re not, you’re working today and they threw me over a pair of red shorts, Lifeguard shirt, bum bag, broad brimmer and a whistle and then said “now get up the beach and show us what you can do!!’ Best job interview ever! I was so stocked. I put the nail bag down and became a lifeguard for the six-week school holidays 2001/2002 at Manly and I’ve never put the nail bag back on since. I’ve been lifeguarding for former Manly Council and now Northern Beaches Council for 18 years!

Best business experience?
Finishing the season with a clean sheet (no lives lost)

If you weren’t doing this, what would you be doing?
Probably be a tradie.

Most stressful part of your job?
Boxing day and Australia Day

Weirdest thing that has ever happened at work?
Had to stop 2 people having sex on the sand in front of the Pantry restaurant

What’s the best part of working on the Northern Beaches? Why’d you chose to work here?
You don’t have to cross the Spit Bridge in peak hour traffic on the way to work! The reason I choose to work in Manly is “why wouldn’t ya?” As the saying goes “7 miles from Sydney 1,000 miles from care!”

Greatest weakness?
One for the road

Does anything scare you?
Semi-trailers on the highway

What’s your most treasured possession?
My 1975 Kombi

What’s your idea of absolute happiness?
Never having to work

Which two famous people would you choose to be stuck in a lift with?
Tony Bonner & Paul Hogan, they’d have some classic stories!

What travel experiences is on your bucket list?
Trip around Australia

How do you switch off?
Read

Who’s your personal hero?
Mum, she’s got the patience of a saint

If you were an animal, what would you be?
Sea Eagle

How would you like to be remembered?
As someone who was always there for his mates